​Like Yesterday
There are some major world events in life that affect us deeper than others. These events often catch us off guard, cause change in the world or within us and are imprinted on our brain so strongly that we can remember exactly where we were and what we were doing when the event happened or when we heard that the event occurred. It seems as if each decade has these events. In the 1960s, for some people that event was the day Kennedy was shot or when Martin Luther King Jr. gave his ‘I Had a Dream Speech’. In the 1970s, many can recall what they were doing when Nixon denied involvement in the Watergate scandal with the notorious words, “I am not a crook”. In the 1980s, some people remember when the Berlin Wall fell. Or in the 1990s when they learned Princess Diana was killed in a car crash. For me, that major world event was September 11, 2001, when the World Trade Center Twin Towers were attacked. No matter how long it has been since this event occurred, it is ingrained in my mental history. I was only a couple of blocks away when the attacks happened, attending my first year of college at Pace University in lower Manhattan.
In this short story I tell my account of what I experienced in the days leading up to September 11th, the day itself, and the days that followed.  This is my answer to where were you on September 11, 2001? 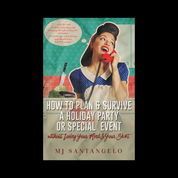 ​How to Plan & Survive a Holiday Party or Special Event without Losing Your Mind & Your Sh*t.
This is a short, funny, step-by-step helpful guide to planning your next holiday party or special event.  Planning a party can be stressful but it doesn’t have to be. Follow these five easy steps to have the best party ever; one where your guests won’t want to leave, one where they will be asking you to host the event every year, and one where you will actually enjoy yourself.